Later, He appeared to the Eleven themselves as they were reclining at the table. He rebuked their unbelief and hardness of heart, because they did not believe those who saw Him after He had been resurrected. Mark 16: 14 HCSB

While hiking I was struck by the tree on the left and how lush and green and full of life.

The tree on the right was dead.

We grow and flourish as we listen to Gods word and take action to change when He convicts us and rebukes us with His Word.

Listen and receive the rebuke.

Most of our family has given up coffee, but I still make it for one.

As the coffee drinker woke late to find no coffee, I simply said “Wake five minutes early and make it yourself.”

God immediately rebuked me quietly in my heart and I made the coffee and ran it to my beloved coffee drinker and handed a to go cup through the window.

My day had begun in the Word and contemplation just an hour before, but I had chosen a harsh response.

The Lord will give us the self-control and  Holy Spirit to do His will and be His vessel. 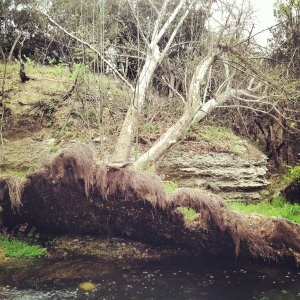 The rebuke put me back onto His path.

Listen for God’s voice in everything you do, everywhere you go; he’s the one who will keep you on track.” Proverbs 3:6

Then He said to them, “Go into all the world and preach the gospel to the whole creation.”